Why settle for mediocre cooking equipment from a recent start up with no history? Rely upon Vulcan Food Equipment's long history and outstanding performance, and take your commercial kitchen to the next level. Starting way back in 1865 as a foundry company manufacturing cooking stoves, Hart Manufacturing grew up through the early 20th century to become one of the largest names in innovative cooking equipment. Vulcan Gas Heating got its start in 1890 and was later acquired by Hart in 1949, forming the present Vulcan-Hart, or simply Vulcan manufacturing company, one of the world's largest producers of commercial cooking equipment in both gas and electric product lines. Now associated with the Vulcan Food Equipment Group, a division of ITW Food Equipment Group, Vulcan has continued to expand its lines into the 21st century.

With a history of high quality design, performance, and innovation, Vulcan is the name many chefs and restaurants around the world rely upon for consistent culinary results. 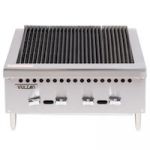