In 1874 Joseph Watts opened an independent machine shop in Lawrence, Massachusetts, the beginnings of Watts Regulator Company. He became a patentee and manufacturer of steam and water pressure regulators. Through the 20th century, Watts Regulator continued to develop products for water heater safety, including a combination temperature and pressure relief valve. Expanding operations into other areas of the waterworks industry and into the back flow prevention market, Watts has also increased their presence both domestically and globally, becoming Watts Industries, with manufacturing plants in New Hampshire, Canada and the UK. Backflow prevention equipment is now one of their largest lines. Now known as Watts Water Technologies, the company continues to be focused on solving customer water-related problems. 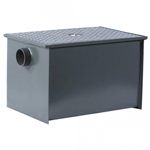