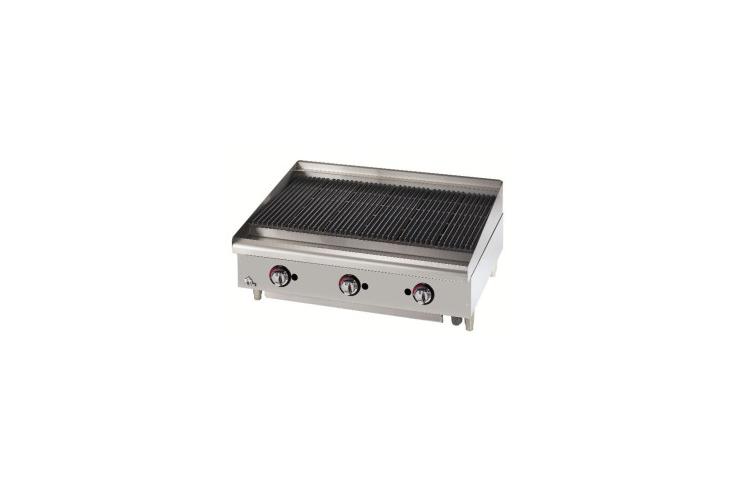 Hamburgers aren’t the only thing that goes on charbroilers. While we were driving around, we saw that Burger King was starting to offer charbroiled hot dogs. The Checkers that was just down the street from the BK was offering grilled hot dogs for a little bit less, so we stopped in. Being in the restaurant equipment business, we couldn’t help but wonder whether they were using the Star Max Lava Rock Charbroiler at Checkers.

One thing which separates the commercial charbroilers from the at-home ones is the volume and the BTUs that they use. The Star Max 6048CBF 48” Lava Rock Gas Charbroiler has 160,000 BTU, which means that there’s a whole lot of firepower used to get the job done – just the type of firepower that you need when you’re cooking a lot of hot dogs or hamburgers on the grill.

You can change the orientation of the grates on the grill, so you can have straight lines or little hash marks on your hot dogs. The backsplash was designed to catch any spattering grease that might happen. So, if there are hot dogs and some veggies on the grill, they’re not going to sputter all over you.

We know how some folks bump into things, and the Star Max charbroiler makes it easier for those folks by making sure that all of the ‘bump-in-able’ parts stay cool. That helps on food spillage, most definitely.

You can get some amazing grills out of these charbroilers. Summer’s just around the corner, and right now makes the perfect time to get the gear lined up.